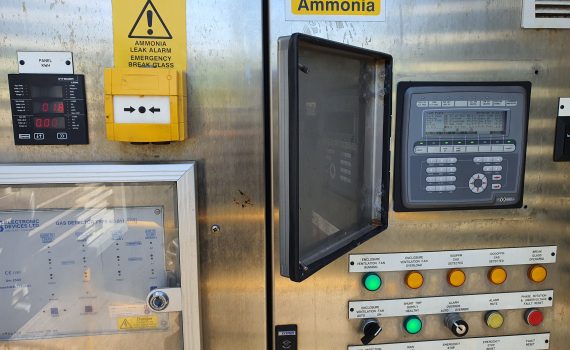 Prior to this chilling plant controls maintenance visit, another contractor had changed some of the settings and adjustments in the controllers. They did this while they were diagnosing a fault with the water system and the pumps. Therefore, this visit was to recommission the plant and to resolve the issues resulting from the adjustments.

The flow controls were found to be set wrong causing a wrong ∆ T (difference in temperature) Our engineer adjusted the pumps, then various valves on the water system, a little at a time, while monitoring the controller. Full load and part load readings were taken until the ∆ T came to within standard industry limits.

A timer had been adjusted which made the compressor wait to stop after reaching 0% on achieving set point. In the meantime, some more heat would build up in the water system and the compressor slide valve would open up a little. The result was that the compressor would run for an hour with the slide valve shut most of the time. The oil pump carried on pumping during this time resulting in a head of oil building up in the discharge pipe- all the way back up to the oil separator. Then, a low oil level fault had occurred. This being confirmed by the sight glass on the oil separator. The compressor had enough oil charged into it to allow a start up. During the start up, a low oil level timer counts down. As soon as the compressor loaded and started pumping, the oil level returned to the correct level on the sight glasses. The timer was adjusted along with the dead band to ensure the chiller off cycled after achieving set point.