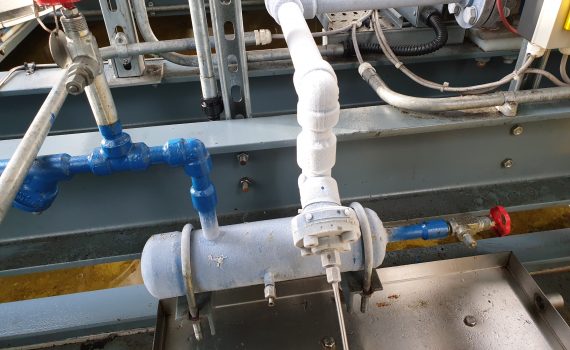 Due to previous industrial refrigeration sludge removal, the plant was down to about half of its 60kg charge of refrigerant. It was starting to show signs of refrigerant shortage as the machine was preventing loading up. An ammonia suitable pump out unit was used to decant the remaining refrigerant into a cylinder for disposal.

Once this had been carried out, any residual refrigerant in the oil and liquid on the low side of the plant was carefully handled until the plant was at the same pressure and temperature of the surrounding environment. See picture of some remaining liquid boiling off in an oil return vessel on the bottom of the flooded evaporator.

Once the pressure and temperatures equalized, our engineer drained the oil in the system from four different vessels. The oil was then removed from site for recycling. Usually, pressure helps with the process, but as the system was empty, gravity was sufficient for most parts of the plant. Nitrogen being introduced to the oil supply pipe to push it back to the oil separator.

A flushing agent specially formulated for use in ammonia systems was used to aid the removal of sludge and oil from the pipework around the chiller.

After a pressure test, the evacuation process was started. This was to boil off any remaining flushing agent, to remove non condensables and remove any moisture. A near perfect vacuum was achieved.

New refrigeration grade anhydrous ammonia was charged into the system, a little at first to check for any leaks. Then, the plant was checked for effective running conditions. All readings were okay with the compressor loading up to 100% before backing off to match the load.