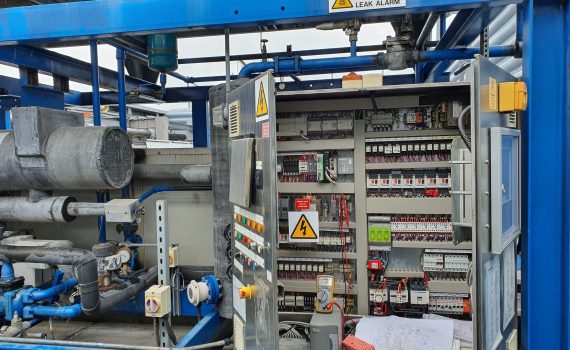 Having an effective chiller controls company saves money! We at Maximus Chillers can repair any fault and upgrade where necessary. Read below to learn more…

One of the non condensables that is found in a chiller is air. It had got into the system of the chiller in the photo due to a poor repair having been carried out. The end user had tried to save money by using a cheaper company to carry out a change of the suction strainer. They had forgotten to purge the pipework of air, leak test, and then pull a vacuum.

The ingress of air had caused a ‘high subcooling’ message to appear on the PLC display. The controls work out the subcooling by looking at the pressure transducer reading, in this example it was 14 bar. Then, the onboard comparator understands the pressure/ temperature relationship of the refrigerant which is ammonia. This gave the saturation point temperature of 39°C. Also, the temperature sensor reading on the condenser was 25°C. The 14°C difference between the two temperatures was the subcooling. The parameters in the controls trigger this message if the subcooling is more than 12°C.

Our engineer attended site to carry out air purging according to standard industry guidelines. Our Risk Assessment Method Statement outlined the necessary PPE that was needed when handling this refrigerant. It also outlined the training and certification required by our engineer to handle anhydrous ammonia.

This gas law states that all gasses in a pressurised vessel will act as if they are on their own. Therefore, with the air that was in the system, the condenser pressure was 14 bar, then after the air purging it was 11 bar. This means that there was 3 bar of air sat on top of the liquid refrigerant in the condenser. The air was causing a false reading of subcooling and therefore triggering the fault condition.

Another fault message which had occurred during the time we have maintained this machine was oil separator low temperature. The oil separator is the vessel, just visible, to the left of the panel in the photo. This alarm is critical to protect the screw compressor from running with cold oil which will cause an expensive failure.

No Heater Burn Out

The oil separator heater was found to be off despite the cold temperature of the oil. The obvious reason was that it had burned out. The breaker was found to be in the 'on' position and there was no electrical charring visible.

When our engineer checked the ohms readings, they were found to be okay and there was no short to earth.

It was found that the 3 phase contactor was not pulling in to bring the heater on. Therefore, the next thing our engineer checked was weather the controller was sending out the run signal. It was- with 24v coming from the controller and the light being lit on the display. Somewhere in between, there was a problem…

After consulting the wiring diagram, our engineer traced the fault to a blown relay. This relay provides a step in between from the 24v coming from the controller, to the 240v coil on the oil heater contactor. Rainwater had ingressed through a screw hole in the back of the panel. It had dribbled to the location of the A1 coil terminal on the relay. Here, it had been ‘tracking’ a few volts to earth. This was sufficient to burn out the coil without blowing the fuse. A drying agent suitable for electrical components was used, then the hole was sealed using a compound. There was a spare relay of the same type in the panel, so it was a quick job to swap it out.

Having done this, the contactor pulled in and the oil heater came on. Balanced amp readings were recorded on all three phases of the heater and the oil started to warm up. The oil separator temperature sensor was monitored for an hour on the controller. When the oil temperature rose to above the trip out level of 46°C, the fault condition automatically reset and the chiller came back on.

We had also previously found that the controller software was too finicky- causing a lot of spurious trip outs. Therefore, we decided to design our own software and upload it. This is easy to do because the controller is Bejer Electronics. It is a blank control system which can be used for almost any chiller, or other application. Read below to find out how we did it…

We rationalised what the customer needed and developed an upgraded program which was much more reliable. Getting a chiller to settle down and cost the customer less money is what we at Maximus Chillers are all about.

The controller had been removed from the chiller and wiped of its program. Then, the finished program was uploaded to the controller and a test rig set up. This was to iron out any teething problems before sending it back out into the field.

When our engineer attended site, he fitted the upgraded controller and plugged it into his laptop. All of the program settings can be adjusted on the controller without the need of a laptop by entering the correct passwords for the program level required. However, a laptop has a bigger screen and so multiple readings can simultaneously be monitored. This facilitated the commissioning process.

The chiller was run tested under various load conditions to check its performance. Also, all the fault conditions were either simulated or tripped out on the chiller. This was so that the program could be put to the test and adjusted accordingly. There were minor problems with fault timers which were adjusted, one at a time, so that no spurious trips would occur.

After monitoring the chiller for the rest of the day, it was time to talk to the customer about the job and get a signature. This chiller is in South West Wales, so it is a long, but very scenic, drive back for whichever of our engineers attends site. Read more about chiller upgrade.