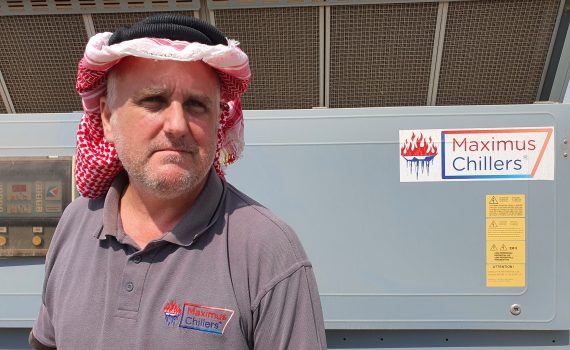 A Saudi chiller repair has just been carried out by our overseas engineer Dave Thompson. There are 17 air cooled industrial process chillers across 5 factories in Jeddah, each with a capacity of 900 kW. This visit was mainly concerned with a controls issue…

In each factory, a Supervisory Control And Data Acquisition system controls plastic extrusion moulding and plastic injection moulding processes. Each SCADA system gathers real time information about the chillers, the pumps, water temperatures and flow rates. The system allows each process manager to monitor, adjust and control their process from the Supervisor…

This is a central control computer in the production office in each of the factories. It comprises of a PC with a hard drive and a HMI (Human Machine Interface) which is a computer monitor on each desk. This screen has graphic displays for each part of the plant: the chillers, the chiller pumps, the process pumps, the PHE pumps (Plate Heat Exchanger) and a 3 way valve on each PHE which is controlled by a Proportional Integral Derivative calculation.

Each SCADA system allows the process managers to simultaneously change set points, sequence, control and adjust the above while their process is running. If an alarm occurs- an alert shows on the HMI. This allows a process worker to correct the issue without an interruption to the process.

The data acquisition is from: chiller feedback, pump feedback, pressure transducers, temperature sensors, flow meters and the 3 way valve positions around each factory. This data feeds in to RTUs (Remote Terminal Units) which then feed back to each Supervisor.

A PHE is used in each factory to keep the process water separate from the chilled water. The load varies depending on how many lines are running, so each 3 way valve opens to the required percentage according to demand.

On this visit, however, our overseas engineer noticed an issue in one of the factories: the 3 way valve was oscillating from the closed position to the open position. This was causing a short cycling condition to occur on the chillers. Also, each time one of the two chillers went off, a 5 minute timer counted down to protect the compressors. Therefore, the process water temperature was found to be too high at 18°C, the setpoint being 16°C. 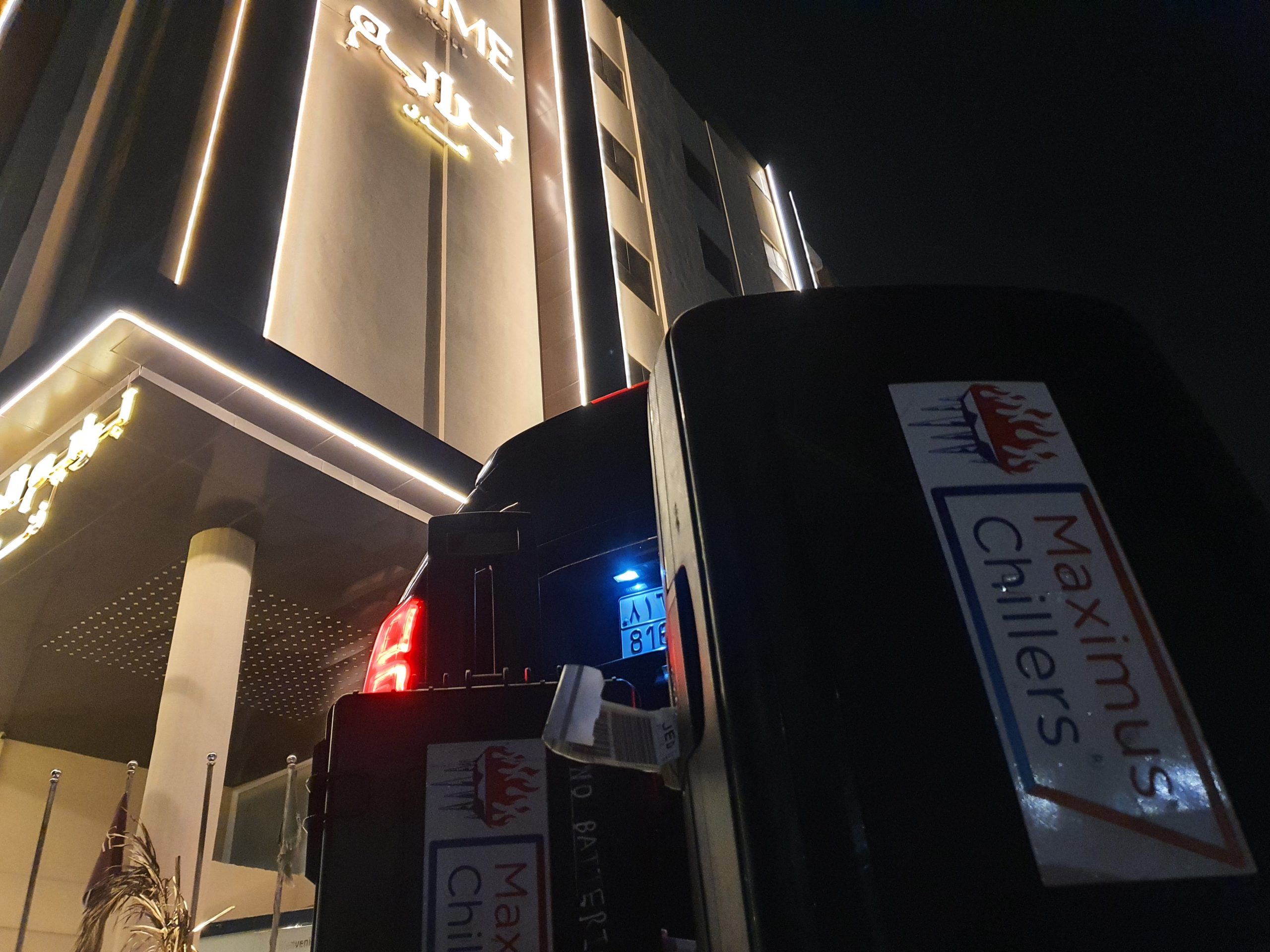 Our overseas engineer knew immediately what was causing the 3 way valve to oscillate: the PID values needed to be tuned. A PID is a simple mathematical program that makes three different calculations to determine the required position of the 3 way valve. These calculations are made simultaneously and balance out over time. The way our engineer tuned the PID was to set all three values to 0 and then adjust them, one at a time, starting with the Proportional…

This value could be seen as an accelerator. The larger the value, the quicker the 3 way valve opens when a sudden increase in temperature is detected. This occurs when a new line has just gone into production. Our engineer followed the procedure which was to increase the value until oscillation occurred and then half it. In this instance the value he arrived at was 10 (this is a multiple of the calculation, not a percentage) This completed, he then moved on to the Integral…

The integral calculation could be seen as being an average over time. Again, the number given to the calculation is a multiple. The larger the number- the more powerful the influence that this calculation has over the 3 way valve. After some trial and error, our engineer tuned this calculation to a value of 2. He then moved on to the Derivative…

The derivative calculation could be seen as being a break. It prevents the PID from keeping the 3 way valve open too long and overshooting the set point. Care has to be taken with this calculation, as it fights the other two. Indeed, this calculation can be left at 0 and the valve will still work. After some time and some careful adjustments, our engineer tuned this calculation to a value of 1.

The PID was tested by our engineer repeatedly by changing the set point and seeing how the 3 way valve reacted. He monitored: a sudden change in demand (Proportional), how the valve settled down over time (Integral) and how the valve closed as the set point was achieved (Derivative) By trial and error, he further tuned the Proportional to a value of 2.

Because of the above tuning, the 3 way valve started sending a steady heat load up to the chillers. This caused the chillers to stop short cycling. The issue of the high process water temperature had improved to 17°C but the setpoint of 16°C was still not being achieved.

Therefore, our overseas engineer went down to the plate heat exchanger and just stood there staring at it for a while. Customers comment about chiller engineers who just stand there staring at something! He realised that when the 3 way valve was partly open, the heat load was being starved up to the chillers which was causing them to unload.

The solution was to adjust the set point of the PID to 10°C and the chiller setpoint to 12°C. These set points caused the 3 way valve to open fully and all the heat load to be sent up to the chillers. 14°C water started coming out of the other side of the PHE. This water then mixed in the weir tank and gave the process the desired water temperature of 16°C. At low load, the 3 way valve partly closed and then shut down altogether when production stopped.