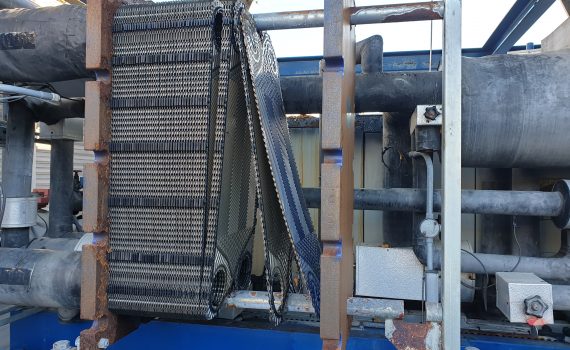 An ammonia chiller had been found to need an evaporator repair on a previous call out. The water Inlet and Outlet to the plate evaporator had been valved off and then it had been drained down. This was to stop any further leaking of water into the refrigerant system.

The plant is located on a roof, so the pump out unit and recovery cylinders were lifted into place with a block and tackle. These in place, the extension lead was run out from the adjacent plant room. Having done this, the recovery unit was plugged in and tested.

Ammonia Pump Out during Chiller Repair

The oil used to lubricate the compressor is located in the:
• Oil separator
• Oil cooler
• Economiser pot
• Oil supply pipe.
Therefore, it was drained from the various service ports into drums and then taken away for recycling.

Breaking into the System

Our engineers then decided to break into the refrigerant system. They both donned their breathing apparatus and full ammonia resistant PPE. First, the refrigerant hoses were removed from the pump out unit. They then opened all of the service valves around the chiller.

The evaporator on this chiller is a plate heat exchanger. The leak had been identified as coming from in between the plates along the side of the evaporator. An attempt had been made to ‘nip’ the evaporator up by tightening the end plate bolts. This had not made any difference to how fast the leak was occurring. 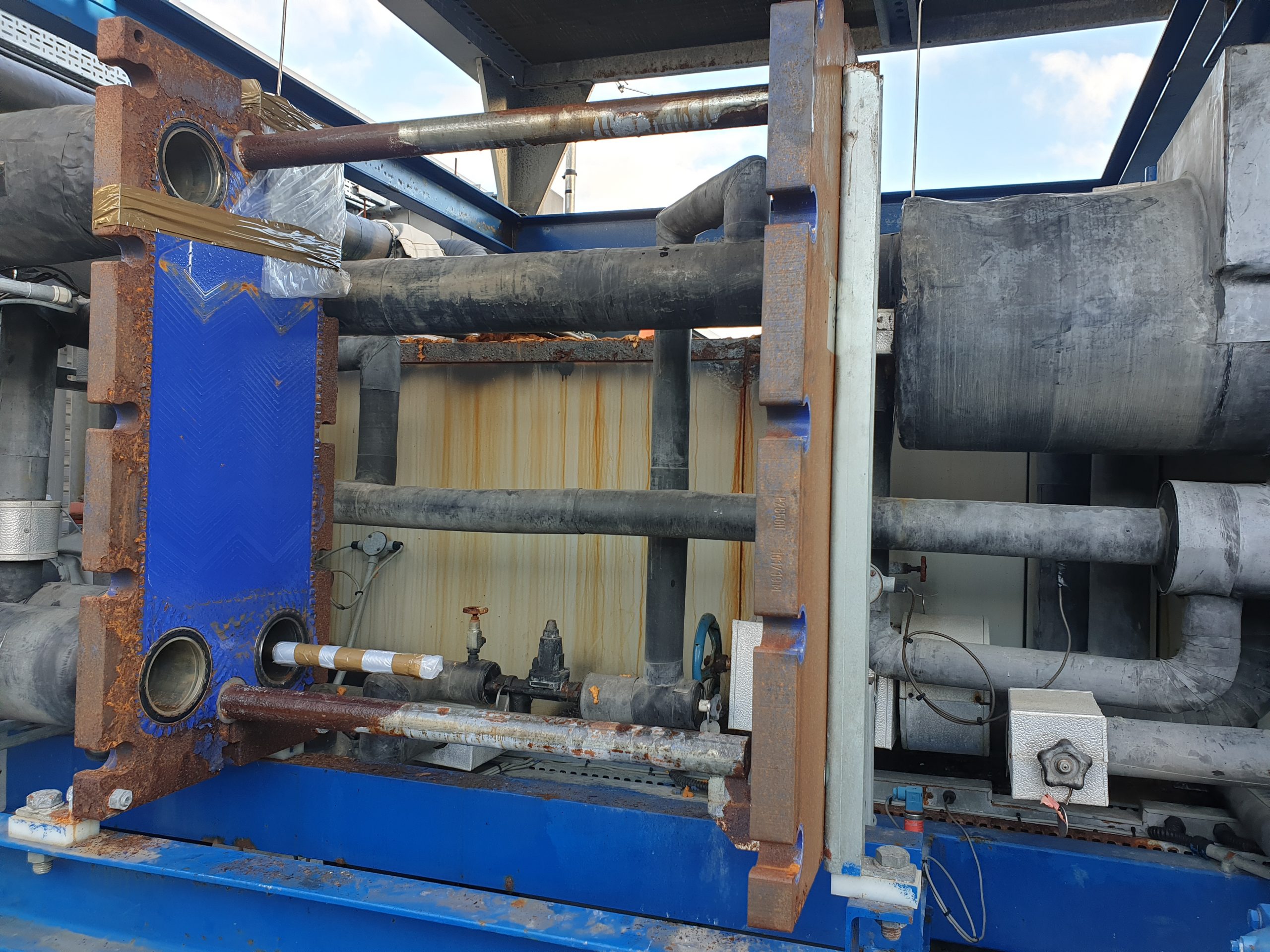 The end plate was unbolted from the rest of the evaporator according to standard industry guidelines. It was then slid to the end of the rail. Having done this, the plates and gaskets were removed and then inspected...

The plates were found to be in good condition, so they were cleaned using our plate cleaning agent. Then, they were taken to the plant room for storage until the rebuild.

The gaskets were found to have deteriorated over time- causing the leak.

We made the gasket set in our workshop from raw materials suitable for ammonia. Then, we sent them to site for the rebuild. The rebuild was the reverse of the strip down: the plates were collected from the plant room and replaced on the evaporator using the new gaskets.

The end plate was lifted into place and the bolts were fitted. Then, the bolts were ‘torqued up’ to the correct value according to standard industry guidelines.

The oil filter which is fitted to the oil pipe on the compressor was blocked due to the moisture reacting with the ammonia refrigerant and turning into ammonium hydroxide. Our Engineer used his socket set to remove the filter housing, then he slid out the oil filter. Spares are kept on site in the stores- so the oil filter was swapped out.

Having closed all of the service ports, the entire system was pressure tested, noting the start and the finish readings. These readings were witnessed by the customer and recorded on the Pressure Test Certificate which was then filed by the Facilities Manager.

The standing and running refrigerant pressures are both higher than the water pressure of the Inlet and Outlet pipes. Therefore, only a small amount of water had entered the refrigerant pipework during the evaporator leak.

Smaller vacuum pumps need to be repaired, usually each morning, due to the moisture being removed from the system. We at Maximus Chillers have an industrial vacuum pump which speeds up the dehydration process. This unit can cope with a higher amount of moisture removal, therefore removing the need for monitoring during the process.

Our engineers used their fittings to connect the vacuum pump, via a hose to the chiller. Then, the dehydration process was started. A Torr gauge was fitted to the appropriate part of the system using a ¼” hose and 2 fittings to get from one thread type to another.

The vacuum pressure was being monitored, at intervals, by the customer. Therefore, the customer let us know when the system pressure had reached the achievable vacuum pump pressure.

The block and tackle was used to winch the refrigerant to the location of the chiller, then the anhydrous ammonia was charged into the system. Having completed the recharge, the service port was valved off and all service ports checked for leaks using an ammonia leak detector.

There was available load for the chiller, so this enabled a full run test at 100%. The chiller loaded steadily until it reached full load. As the set point was neared, the controller unloaded the compressor to match the load which was coming from the building. After an hour, the chiller achieved set point, counted through an off cycle timer and then continued to run seamlessly.