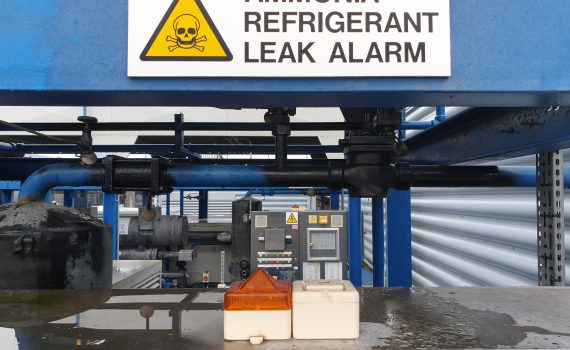 Chiller call out is the essence of what a company like Maximus Chillers is all about. It is a time when our engineers come into their own. Read on to see examples of how we do it…

At first sight this appears to be a dangerous situation as ammonia is very harmful to human health. This is because of its corrosive and toxic characteristics. Each of our engineers carries breathing apparatus and full length ammonia PPE should it be required.

The work location in the photo is assessed using an NH3 detector. This is sensitive enough to detect lower than the 35 parts per million short term exposure limit. The detector is fitted to the work wear of our engineers whilst near to the plant. When the alarm does not sound and there is no smell of ammonia- it is safe to proceed.

Usually this alarm is due to a controls issue rather than a leak. There are various reasons:

Chiller panels for this kind of plant have a UPS (uninterruptible power supply) This is a battery which is charged by the mains. When a power failure occurs, the charge in the battery supplies 240v to the ammonia alarm. This means that the chiller continues to be protected. When malfunctions occur to the UPS or the alarm system, the yellow warning light and siren is activated which needs to be manually reset.

The sensors have to be calibrated at regular intervals. The base setting of 0 parts per million has to be set and then the trip outs of 35 and 25 parts per million. These sensors can be knocked out of calibration by small leaks over a long period of time, or they can malfunction internally. If you require the service of your leak alarm- email our Technical Support Desk and will arrange a site visit.

Chiller Call Out for BMS Failure

Chillers can get blamed for everything as the customer can notice a building that is getting warm and then call us out. An example of this is when a new customer of ours signed up to a maintenance contract after a long period of neglect. They did so because the office workers in a large office block had started to leave their desks and walk out of the building.

When our engineer attended site, he found various faults with a row of four, 500 kW chillers on the roof. There was found to be N+1 redundancy built in, so he considered there to be sufficient cooling available to satisfy demand.

Despite there being available load, the chillers were not being given the run signal from the BMS. The toggle switches on the BMS panel did not give the run signal to the chillers when they were put into Hand. This was found to be because of other issues with the poorly maintained panel.

Our engineer therefore decided to link out each of the chillers in their respective panels. He consulted the wiring diagram and made the modifications accordingly. He then entered the password for that particular chiller and adjusted the program settings. These changes made the chillers stand alone and not reliant on the BMS run signal.

Chiller Call Out for Pump Sets

The pump sets were also found to be in poor condition. There were found to be failed pumps, blown contactors and defunct controls. The good news was that by changing components in the panel, he managed to get at least one of each pair of pumps going for the various water systems used around the building.

This is a machine with an internal pump and a pressure switch which is used to maintain the pressure of the water system. Both the run and the standby pumps were found to have failed with other component failure in the unit as well. Our engineer decided to manually fill the water system with mains water to build up the pressure.

Having done all this, our engineer got the chillers away and watched the water temperature come down from 24°C to 6°C. As the chiller systems came down to set point, they unloaded to match the demand from the building.

The office staff started to return into the building and resumed work at their desks.

Fault Finding during Chiller Call Out

Now that the pressure was off, our engineer carried out the necessary fault finding to the systems that had failed:

Three of the systems were found to be locked out with low pressure alarms. He assessed the quantity of recovery cylinders and refrigerant that was required. Then, he submitted a report to Head Office for a return visit to carry out the repairs.

Some of the systems were found to have blocked condensers. The call out was during the summer when a high pressure condition was more likely to occur. A build up of contaminants had reduced air flow and caused the high pressure switches to be activated. We arranged a site visit with a special cleaning agent to remove the contaminants and restore the air flow through the condenser fins.

Chiller Call Out for Flow Switches

These are a switch used to detect water flow and two of them were found to have had failed. There are various types for different applications. We select a suitable flow switch and then make the necessary adjustments to the internal control screws. This ensures that the switch will function correctly when problems with the water system occur.