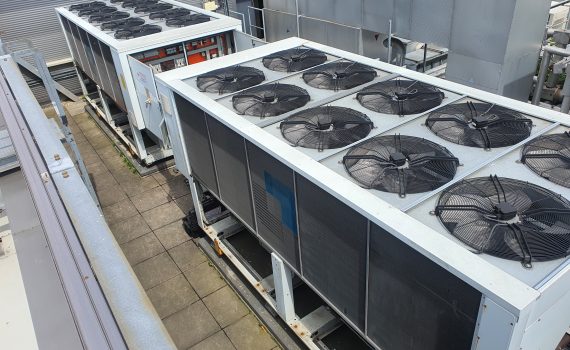 A water chiller repair visit to rectify the non condensables which were discovered in a refrigerant system. This condition happens when a system is purged through with refrigerant. Carrying out this procedure does not remove the air from the complicated internal pipework. Read on to find out how this condition was diagnosed and then repaired...

Because we sorted out various other problems on the first day of the contract, this customer is really happy with Maximus Chillers. We have a 3 year Maintenance Contract with them too. We know that we are expanding in a recession because we always put the customer first. It is easy to win a contract, but to keep one means that we have to provide a service that is second to none. With a full complement of specialist equipment in each mobile workshop and engineers with years of industry experience- Maximus Chillers completes the picture.

That all gasses in a vessel will act as if they are on their own. The air in the system works its way round to the condenser where it sits on top of the liquid refrigerant and won’t condense. This is where the term non condensable comes from. Let’s say the condenser pressure should be 8 bar on a system running with R134a refrigerant. The air, acting as if it is on its own, in this instance, was raising the condenser pressure to 15 bar. This was 1 bar below the high pressure trip out. The higher pressure also causes an increase in electricity consumption.

A 30°C false reading of subcooling was recorded due to the air in the refrigerant system.

When one of our engineers arrived on site to resolve the issue, he started by decanting the refrigerant from the system. Because the refrigerant was contaminated, he sent it back to the suppliers for recycling.

No refrigerant leak was suspected, but our engineer carried out a nitrogen pressure test as a matter of course. This was passed, so now on to the next phase of the job…

This part of the job rectifies the previous poor repairs. A vacuum was pulled overnight of 2 Torr. This process removed the non condensables and also dehydrated the system.

Now that a professional repair had been carried out, the condenser pressure was found to be running at 8 bar. The running amps on the compressor had lowered too.

The power consumption of the various plant around the building is monitored on the customer’s computer in his facilities office. This is to help identify where electricity is being wasted. He has auditors who assess the efficiency of the building and he has targets to meet. He had already noticed the more efficient running of the chiller subsequent to the repairs. The end user also monitors the energy consumption and worked out the cost saving of the repair over time. The repair would soon pay for itself and then start to save the building money.

The condenser on the other system of the same chiller had recently blocked due to grass pollen. Our engineer brushed it down and chemical cleaned it while on site at no extra cost to the customer.

The chillers are fed by a pump set comprising of two pumps. The second pump is a redundant system (N+1) Both pumps are fed from inverter drives which lower the electricity consumption of the pumps. There had been an issue reported with the building management system (BMS) so Pump 1 was running in Hand. Our engineer changed the running pump over to Pump 2 which he also left running in Hand. This was to even out the running hours between the two pumps.

At the end of the job, our engineer completed a full report on his phone which was uploaded to Head Office in Droylsden, Manchester. He also filled out a Job Sheet with his findings which was duly signed by the customer.

How do Chillers Work? 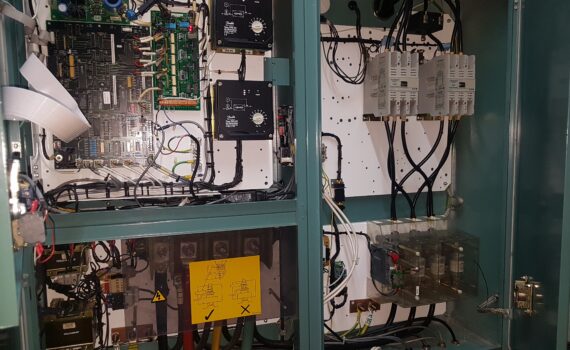 Maximus chillers provides water chiller maintenance to all kinds of machines. Some of which have kilowatt hour meters fitted. This means we can monitor the reduction in energy consumption, directly as a result of our maintenance being carried out.

Maintenance is carried out to ensure every aspect of your chiller is running efficiently. We believe our maintenance checklist is the best in the industry. It looks in detail at the running conditions of the plant, component adjustments and the parameters in the controls. The checklist is used to assess if there are problems that are starting to occur before a safety shutdown happens. Below are some of the issues that we keep on top of to increase the efficiency of your plant.

The build up of dirt acts as an insulator in shell and tube heat exchangers. These are used for the evaporation and the condensing of the refrigerant.

In a shell and tube condenser, the reverse of the above will occur. Tube fouling, acting as an insulator, will prohibit the rejection of heat from the system. The head pressure control will open the condenser controls to try and assist in heat rejection. Heavy fouling will cause an increase in the consumption of energy. Eventually a safety shutdown will occur causing loss of production.

If the loading of the reciprocating compressors is faulty, the plant will not be able to effectively match the load.

Too much loading may occur, causing the water chillers to achieve set point too quickly. The plant will then go through the off cycle. This means that the plant will have to load back up, using more energy than matching the load continuously.

Should the plant be unable to load up to the required level to match the load, this will cause the water temperature to creep up and the lag chillers being called for to match the load. More chillers running than necessary dramatically increases energy consumption.

Read about leak checking at the Refcom site 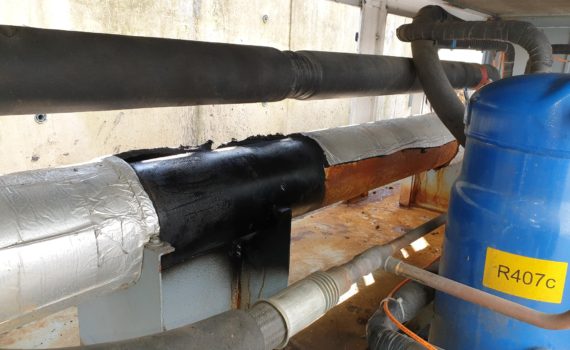 Not often does a water chiller service of evaporator fault occur. The evaporator can freeze up and burst the tubes inside the shell. This fault involved the shell itself bursting. On close inspection- the shell was made out of thin steel- not the usual heavy rolled steel. It looked like the near end on the photo had sagged down- causing the evaporator shell to buckle.

This option would be expensive due to the cost of the evaporator. It would be a difficult visit because of access issues. The builders decided to site the chillers round the back of the building, this makes them very difficult to service. Our lift and shift guys would be needed to get the old chiller evaporator out and the new one in. There is a difficult corner to get round where the evaporator would have to be tilted up to get it round. Also, a fence wound have to be taken down around the chillers. Of course, security is an issue but so is access to the chillers.

Because of the above, it was decided by the customer that we would fix the leak using silver solder. The Risk Assessment Method Statement allowed for the job to be carried out with a half hour fire watch. The oxy-acetylene lines were leak tested prior to the job. Both leaks were soldered up but despite the evaporator being drained down, there was still water and steam trying to get out. Not the best soldering resulted- but it held.

Because the chillers are outside, the paintwork is essential- poor paintwork will reduce its life. After preparing the surface, specialist paint was applied so as to protect the evaporator for the future.

The purpose of lagging is to reduce heat gain from the environment and provide protection from the elements. Therefore, the lagging was reinstated after the job.