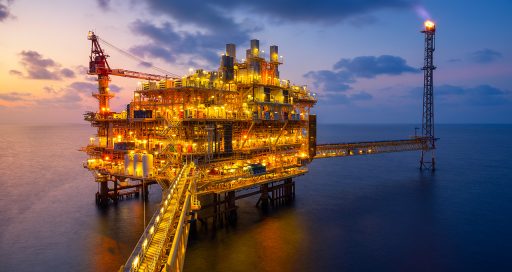 On a previous visit for offshore & marine chiller service on an oil rig, our customer had shown us to a large air cooled chiller. His complaint was that it was tripping out all the time when there was nothing wrong it. Complicated ‘in house’ controls, where a string of PCBs, plugged into each other were found in the panel. We recommended a controls retrofit and received the order to carry out work…

All of the finicky control PCBs were removed from the panel and placed in the electrical recycling skip.

The control wiring was removed and grouped together according to colour. This was because the same wiring was going to be re used to re wire chiller.

Two Danfoss inverters were installed into the panel. These were to provide a VSD (variable speed drive) for two large screw compressors.

Danfoss EEVs were easily brazed into place as both systems could be pumped down and valved off. This part of the fridge system was then nitrogen pressure tested then vacuumed according to standard industry guidelines.

Both systems had a Danfoss fan speed controller fitted to the chiller frame to control the condenser fans. Then, the control transducers were wired in to the FSCs. This made them stand alone and capable of independently controlling the head pressure of each system.

The controller in the photo is capable of running the inverter drives for the compressors and the electronic expansion valves. It was wired in, one wire at a time: first the Inputs, then the Outputs and finally the power supply.

We always carry out commissioning in the morning as this is the best time of the day to solve problems. It was time for a cup of coffee and a deep breath. Our engineer had only re wired one panel previously and he was also a long way from the office.

When he switched the power supply on, there were no immediate problems, so he waited for the for the timer to count down. System 1 started and after a while System 2 started too. There were a few teething problems with the settings, but then the chiller settled down. No more spurious trip outs.

A bulker had got into difficulties in the Irish Sea and been towed to Liverpool for service. It was discovered that a rope had got wrapped around the propeller. Aside from this, one of two chillers which are used for the cooling of the living quarters had tripped out. The Chief Engineer had therefore decided to kill two birds with one stone. Most of the crew were from around Tanger Med in Morocco and so spoke only a little English. They also have limits as to how far they will go with a fridge system. Not to worry though: all we need is to see the plant and we can take it from there...

The plant had a sea water cooled condenser which was fed via a pump set in an adjoining plant room.

The controller alarm message stated that there was a low pressure condition in the evaporator. On interrogation of the menu, however, the pressure of the evaporator was found to be 7 bar which was the same as in the condenser.

Our engineer therefore decided to follow through the reset procedure. The alarm cleared and the machine started up. Then, it pumped down to 1 bar and tripped out on the same fault.

While this was happening, our engineer was quick to notice that the liquid line solenoid valve had not activated. He decided to manually jack it open with his test equipment and the refrigerant rushed through okay.

Having decided that the valve was okay, he then investigated the coil. The connection box and the wiring was found to be in poor condition.

He then isolated the power supply and checked that it was dead.

The wiring was cut back and he re made the connections onto the solenoid coil without using the connection box. Then, he insulated the area with a special compound.

Now to see if he had got the diagnosis correct. He powered up the chiller and carried out a run test- all readings were found to be nominal and the machine went back into service.

The main part of the planning for an offshore visit is done on the previous job. A detailed list of the required parts, materials, refrigerant, tools and equipment is composed on our Offshore Manifest Sheet. The questions and headings have been designed to prompt an engineer into thinking about all aspects of the job in detail.

Having emailed the above mentioned sheet to Head Office, we cross reference the information with the engineer while he is still offshore. All this preparation is to ensure that the upcoming job goes as planned. There would be nothing worse than to have to postpone the job due to a lack of preparation.

We have several steel chests that we use for shipping to oil rigs. After the parts and materials arrive at Head Office, they are checked off, one at a time into the shipping chests. Then, the necessary tools and equipment is checked off too.

Our customers also have their own equipment in their stores. They have things like fittings and fuses too. This is a good backup for when something is unforeseen, or if something breaks.