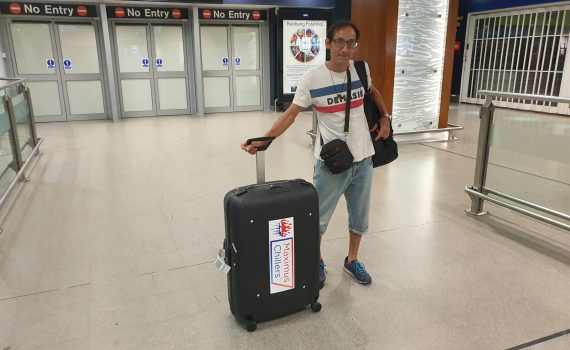 The first industrial chiller repair for our engineer visiting from The Spanish Office was to fit a condenser fan switch and contactor. The old switch had started 'chattering' which was damaging the contactor- black soot had been seen coming out of it.

The new fan switch was fastened to the side of the panel and a capillary tube was fitted down to the discharge pipe.

The fan contactor was a like for like straight swap out. The three phase wiring was changed over to the new contactor along with the control cables.

The Maximus School of Chillers

Each afternoon during the week, our Spanish engineer attended The Maximus School of Chillers at Head Office in Droylsden, Manchester. This was to improve on his technical capability and customer diplomacy skills. We have test rigs available which include the panels and controllers of certain chillers. These test rigs were used to simulate faults which our engineer then diagnosed. We also have a classroom to carry out scientific and technical training such as refrigerant thermodynamic properties.

On Tuesday, we scheduled a flow swich to be replaced on a 500 kw chiller for a customer of ours in Manchester.

The fault had recently been identified on a Call Out. The switch had stuck in the trip out position even though the pump was running. An attempt had been made to lubricate it then loosen it off, but the switch still wouldn’t work.

Our flow switch was a different type to the one which came with the chiller. Therefore, we had asked the customer to weld a fitting into the water system. We use a range of flow switches depending on:
1) Indoor or outdoor use.
2) High flow and low flow water systems.
3) Chemical resistance.
We had selected the appropriate flow swich off the shelf from our stores at Head Office.

Having fitted the new flow switch, we carried out adjustments to the trip point on the switch to ensure that it would function correctly while in operation. 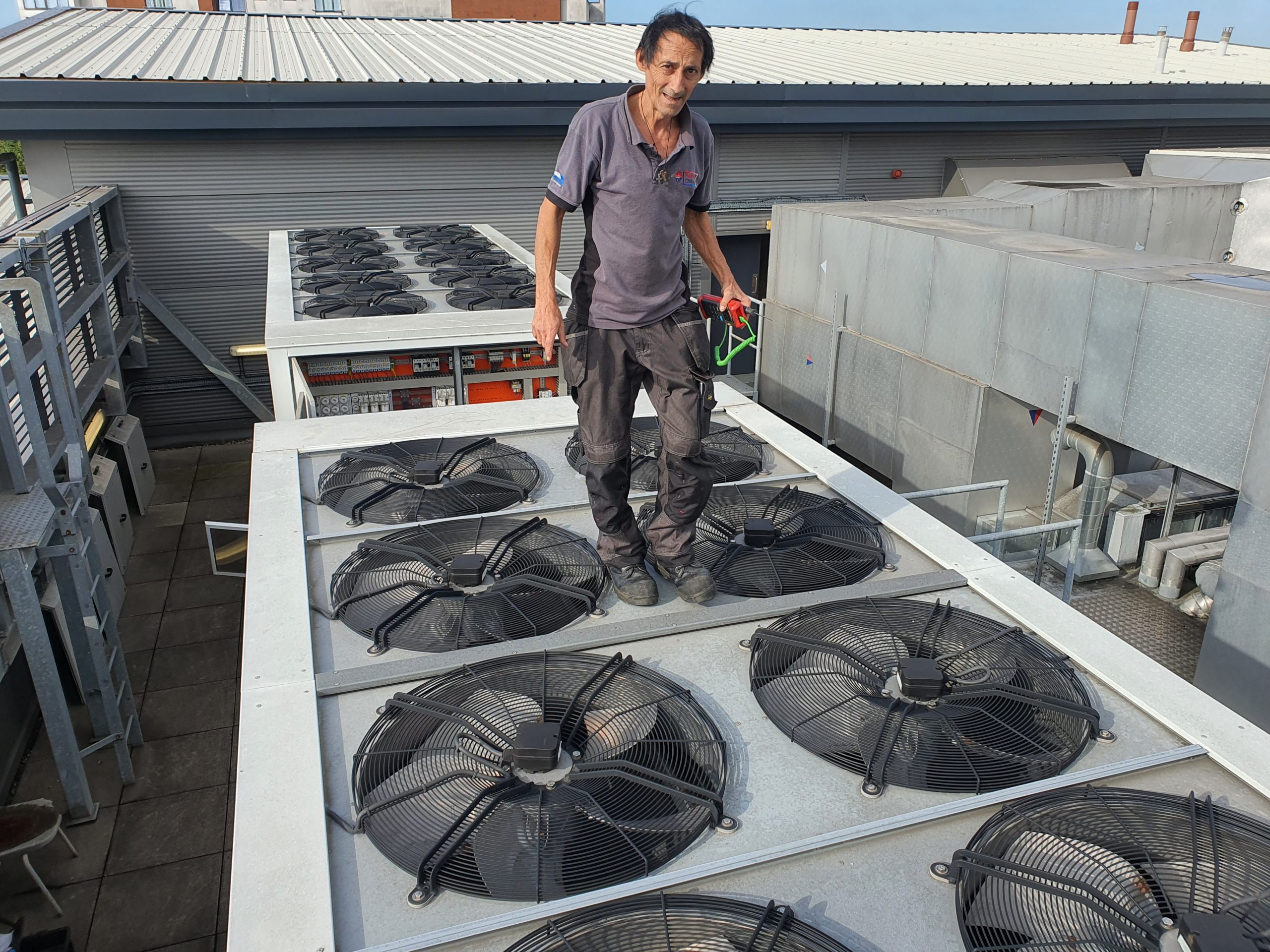 Our chiller engineer from the Spanish Office

On Wednesday we attended a Call Out at a factory in North Manchester. This customer Has 16 industrial process chillers of around 400 kw. They are used to cool down various industrial processes which require different setpoints. The symptoms were the same as the previous day with the flow switch in the trip put position with the pump running. This time, however, there was no flow to the atmospheric buffer vessel. The pump then started intermittently making a very loud noise. Our Spanish engineer therefore isolated it and locked it off to carry out an inspection. First of all, he removed the shaft coupling plate to see if the shaft was slipping round. The pump shaft and the motor shaft were in good condition and the shaft coupling was tight.

This type of pump uses a series of centrifugal impellers, each discharging on to the next. By the time the water reaches the discharge of the last impeller, the required pressure difference and flow rate has been achieved. When our engineer turned the shaft- it sounded like a bag of spanners. Some of the internal components had broken away and come loose. Therefore, our customer arranged for the onsite engineers to swap the pump out with a spare from their stores.

On Thursday we attended an emergency call out to a hospital in the North West. The chiller that we were shown to is critical plant as it feeds the operating theatres. To make matters worse, the redundant chiller on the same water system is now beyond repair and awaiting replacement. Therefore, the operating theatres were at 24°C and patient operations were being cancelled.

The chiller was not in fault, but it was also not enabled. The remote start/stop from the BMS was the first thing that we checked- it was okay. No run signal was found, so the wire was traced back to Relay 10. There was no A1 signal found on Relay 10, so this wire was traced back to Timer 6. There were volts to Input 15 but no volts through to Output 18. Interestingly, there were volts to the A1 timer terminal. Our engineer gave the timer a tap- the green and the orange lights flickered faultily- the volts then got through to Output 18 and Relay 10 energised. At the same time Compressor 1 started, 30 seconds later and the chiller was away with compressor 2 running as well. The operating theatres came back down to temperature and the scheduled patient operations continued.

A technical examination had been prepared for our Spanish engineer Pedro Garcia in his first language. The lessons in the afternoons at The Maximus School of Chillers had also been carried out in Spanish. This is because Dave Thompson, our technical support engineer had lived in Spain when he was a child and can speak Spanish. The technical training had mainly been concerned with heat load calculations, compressor design calculations including volumetric efficiency, Charles Law of Constant Volume and Dalton’s Law of Partial Pressures. Pedro passed with 89% and the results were recorded in his company employee file.

Read more about Dalton's Law of Partial Pressures on Wikipedia