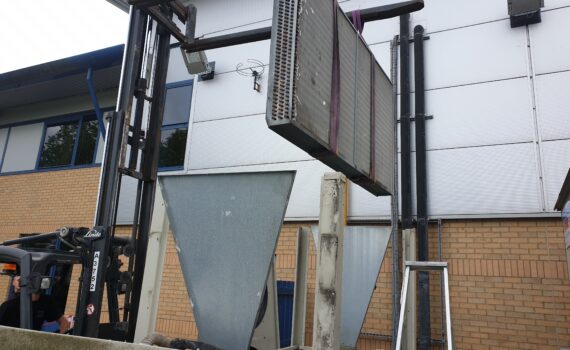 We recently undertook the job to carry out bespoke R407c chiller condenser retrofitting in the North West.

The old condenser looked alright on the surface- the fins were in good condition. The condenser was 18 years old, however, so when an attempt to repair a leak was carried out- the condenser leaked further along. This is because of the warming of rusted and corroded copper with an oxy-acetylene torch.

We arrived on site to measure up for the job. The ‘V’ condenser was built to order. We manufactured an exact replica to the same specifications and sizes of the old one. The operating pressures and high pressure cut out limit were taken into account in the design and the use of materials.

Lift Out of the R407c Chiller Condenser being Retrofitted

On the day of the lift and shift we isolated the panel and checked it was dead, then we removed the panel and laid it on its front. This was to access the rivets behind the panel. These rivets, the ones on the other end of the chiller and around the lid were removed using a tool. The fans were disconnected and removed to make the lid lighter to lift off. Then, we attached slings to the chiller condenser and lifted both halves of the 'V' out.

This part we did not want to get wrong as the condenser was brand new and did not have a mark on it. A reverse of the removal- it fitted perfectly just the same as the old one. With the lid lifted back on and the fans in- time for brazing then the pressure test.

The pressure test was satisfactory so our engineer put the system on vac for dehydration purposes and the removal of non condensables. After a deep vacuum was achieved the system was recharged and run tested. No issues were found.

Read more about air cooled condensers at the Institute of Refrigeration