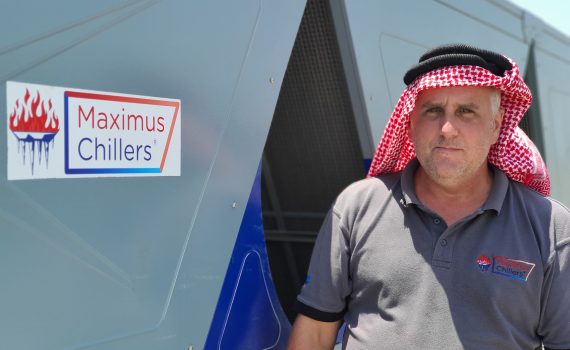 We arranged the trip to carry out Saudi chiller commissioning for our Company Director and overseas engineer Dave Thompson. 2x 500kw air cooled chillers had been positioned at high level on a gantry. These were at the back of a newly constructed building at a factory in Jeddah. The factory produces plastic water pipes used for buildings and industry. Their own pipework, produced onsite, was used for the water systems of the plant in this article.

There are two underground water system reservoirs for the plant. A check valve is fitted below the water line on the inlet pipe feeding all of the pumps. This ensures that water is available to the pumps on start up, despite the reservoirs being below the pumps.

A third pump set also sucks from the above mentioned underground process reservoir. It then discharges up to a ring main which goes along the top of 6 lines. Then, it drains down into plastic extrusion moulding machines to cool the newly formed plastic pipe. It does this at just the right rate to prevent bending and distortion. After this, the chilled water drains at gravity pressure back into the underground process reservoir.

All of the pumps run on inverter drives which saves a significant amount of electricity. These drives are located in three panels- one for each pump set. A spare inverter is available in each panel for easy switch over in the event of failure. A touch screen pump control display is fitted to each panel. Each display is wired into a PLC.

The PLCs in each panel are in turn wired into a Schneider Electric touch screen central control interface. This is located on the front of the middle panel. All of the analogue sensor and transducer inputs are wired into this interface from around the plant. The underground process reservoir temperature sensor was found to be reading 4°C high, so an offset was put into the program. The digital outputs go from here to the various components around the plant.

One of these components is a 3 way valve on the plate heat exchanger. This valve regulates the percentage flow of water through the PHE, relative to the percentage of bypass to the chillers. In high load conditions, 100% of water is pumped through the PHE. With no load, 0% of water goes through the PHE with full bypass to the chillers. In a low load condition, the valve modulates at between 0% and 100%. All of these scenarios achieve a close control at 20°C in the underground process reservoir.

The chiller evaporators are protected by a ‘y’ strainer on each inlet.

Both of these water systems go through a Bollfilter back flush system. As the difference in pressure between filter inlet and outlet reaches a predetermined level, the back flushing operation is initiated with a green light being illuminated. This feature prevents the need to manually clean the filter at scheduled intervals. During the visit, however, these filters were overwhelmed by the residue left in the pipes and a narrow 100 micron filter size. The maximum difference in pressure was exceeded and the filtration system yellow warning light became illuminated. The filters were stripped down, cleaned and reassembled.

The onsite engineer who had assisted in designing the system had the foresight to build a second filter into the water system. This ‘y’ strainer runs in parallel to the above Bollfilter and ensures seamless operation of the factory in the event of a blocked Bollfilter.

Start Up during Saudi Chiller Commissioning

On first start up of the chillers, they were both found to be tripping on high pressure and not loading up. The chillers run on R134a which is a low pressure refrigerant in the UK. In Saudi Arabia, however, the ambient is around 40°C. This translates to an operating pressure of between 15 bar and 18 bar depending on loading and water temperature.

Unloader switches are available on each system. These feed back to the PLC, from here the program energises the loading solenoids. They had been set to 14 bar which was the cause of the unloading issue. Our overseas engineer set the switches to 19 bar.

He then changed the high pressure cut outs from 15 bar to 20 bar.

The pressure relief valves vent at 23 bar which is enough of a difference in pressure from the high pressure cut out.

Because only one line was running at the time of commissioning, one of the chillers was found to have tripped on a low temperature related trip. This fault had occurred the following morning when the water temperature had become too low due to the minimum run time of the compressors. The freeze up set point was also found to be too high at 7°C. Our overseas engineer entered a password into the front end of each chiller and modified the parameters to prevent this fault re occurring.

The water system temperature was allowed to build up to 30°C when production in the factory was offline. Then, the chillers were ran in anger until set point was achieved. An efficient superheat value of 3°C was recorded on all of the systems. This is due to electronic expansion valves being fitted. When the factory came back online, the systems were found to be off cycling or unloading to match the load.

Redundancy has been considered in the capacity of the chillers to allow for future factory expansion and systems being offline during repairs.

Read more about Jeddah on Wikipedia