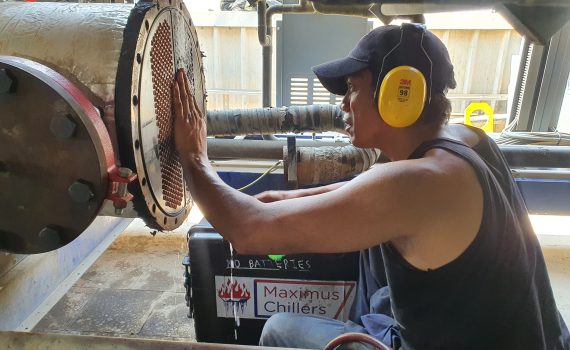 On a recent visit to Saudi, our overseas chiller engineer carried out an evaporator repair. This customer flew us out because of on going issues with their evaporators. Various recommendations were made to improve reliability….

A full analysis of the chilled water quality was carried out including samples being sent to our laboratory at Head Office.

There had been a bacteria problem which had occurred 4 years ago. The water temperature and conditions can be just right for a particular type of bacteria to thrive. The bacterial growth spreads around the water system, the plate heat exchangers and the evaporators until it completely coats all surfaces.

This bacterial layer can be 2mm thick and acts as insulation between the heat exchanging water and refrigerant. This dramatically reduces the capacity of the chillers. The chillers achieve set point due to not sensing heat. The factory gets warmer due to not being able to reject heat.

The customer had brought in a chemical treatment company who started using a biocide to control the bacteria. This had worked effectively, but it had a knock on effect…

The evaporator tubes had been corroded away with the over use of the biocide. When our overseas engineer inspected the MSDS (Material Safety Data Sheet) for this particular chemical, he found it to be corrosive. When he analysed the dosing rate, he found that it had been significantly over dosed. This over dosing had corroded and rotted through the copper evaporator tubes which was causing re occurring refrigerant to water leaks.

The solution was to recommend a full drain down of the water system when the factory was in shut down. A list was provided to the customer detailing which chemicals should be used and their dosage. This list included a biocide, an inhibitor, PH control chemicals and chloride control chemicals.

The water system components were found to be installed in the wrong position, or not installed at all. This was found to be another major contributing factor to the frequent evaporator failures. A previous design company had sent our customer the plans of how to build the water system, but these plans had been mis interpreted by the local industrial pipework company.

Most of the evaporators were found to be in use without a strainer fitted. This meant that foreign objects from around the water system were rattling through the evaporators and then causing damage.

After a report was forwarded to the onsite repair manager, a local consultant was brought in to oversee the re installation of the chiller pipework. Each chiller’s water system pipework was scheduled to be repaired one at a time, this was so that minimal disruption was caused to the factory process.

Pressure and temperature gauges were fitted at the same time that the chiller pipework was re installed. This was to allow the onsite chiller engineer to carry out the necessary adjustments to the water system flow rates.

The photo shows one of the chiller evaporators with the end plate removed during repairs. The onsite chiller technician in the photo was carrying out an inspection to the tubes to identify which ones were leaking.

The leaking tubes were then taken out of use. Standard industry guidelines were used to pressure test the rest of the evaporator to ensure the integrity of the system.

Next, the water that had got into the refrigerant system needed to be removed. This was a difficult process as the compressor had sucked the water through and discharged it into the condenser. Luckily, the amount of water going through the compressor had not damaged it. This was because the compressor is a high quality Bitzer which is very robust. The vacuum pump was fitted to the system and the moisture removal process was carried out over a period of weeks.

The chiller was started up and then tripped on low pressure shortly afterwards. This was because there was still a shortage of refrigerant in the system. Therefore, more liquid refrigerant was charged into the system until the chiller ran without tripping out.

The superheat and subcooling values were found to be outside standard industry guidelines. Therefore, refrigerant was continued to be charged into the system under full load conditions. The onsite chiller technician continually monitored the readings on his test equipment and the program readings of the chiller. After an hour of trimming the refrigerant charge and monitoring the readings, he got the superheat and subcooling values to be within standard industry guidelines.