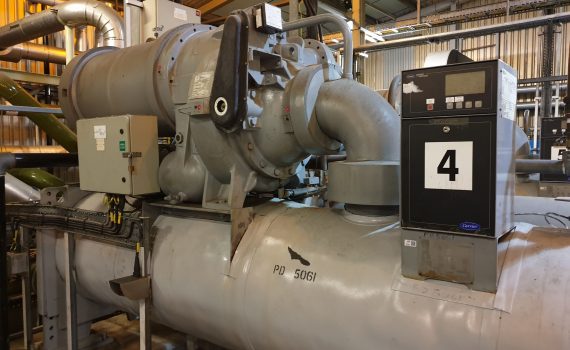 With shell & tube chiller evaporator maintenance to be carried out- it was time to sign the permit to work and get going. There are 5 chillers in total, but 1 of the chillers had been dismantled by the previous company and is unlikely to run again. This left 4 flooded systems to be maintained while the factory was still in production. Therefore, it had been decided in the Method Statement that one chiller would be done at a time. The plant had been designed with N+1 in mind, as it is critical not to loose the process- causing a factory shutdown. This means that so long as 2 of the chillers are running, there will be no loss in production. With 1 chiller out of service and another being worked on, this left 3 chillers in operation. If 1 were to fail, then there would still be the minimum of 2 left running.

In the unlikely event that 2 of the 3 chillers left running were to fail, an action plan was in place to lift in 1 MW of hire chillers.

The hire chillers would come with 2 engineers to pipe the pump sets into the onsite water system. This water system has been designed with this in mind so ‘stab ins’ have been built into it with shut off valves for the connection of temporary hoses.

The chilled water is close control with a critical 6°C to 8°C set point. The chillers in the photo are very good at achieving this close control as they use vanes on the inlet to the suction. These vanes can be adjusted from anywhere between fully closed, with a small amount of bypassing, to fully open.

The hire chillers, on the other hand would not be close control. They would be multiple system chillers with various stages of loading on each chiller. One 600 kW chiller and another 400 kW. Each of the chillers onsite are 1.3 MW, but as they never run at 100% the onsite maintenance manager agreed to the proposal. It is unlikely that this plan would be needed, but planning for it is critical. A 10,000 ltr buffer vessel was decided upon to make the hire chillers close control. The chillers discharge into the buffer vessel, then the water mixes around before returning back to the chillers. The process water too being discharged into the buffer vessel before returning to the process. The position of the inlet and outlet on both water systems being strategically decided upon to ensure a steady exchange of heat and a smooth water out temperature back to the process.

Valve off and Drain Down

The Water In and Water Out pipes were valved off and the contents of the evaporator drained down. There was no glycol or chemicals in the water system which made the job easy. Otherwise, the water in the evaporator would have to have been pumped into vessels for disposal.

The lift and shift team were on site to assist with the removal of the end plate. After the bolts were removed, they attached their lifting eyes and straps, then lifted the end plate to the side.

We have in our stores a specialist evaporator cleaning tool. After a period of time, the evaporator tubes become fouled with impurities picked up from the water system. Also, contaminants get in from the air into the water tower. The strainer has some effect, but thermal insulation builds up on the water side of the tubes. It prevents latent heat being absorbed into the fridge system from the process. After the cleaning process, the efficiency of the copper tubes was increased to the same level as when the chiller was new. This is part of what we call the MAXIMUS ADVANTAGE™ Any Chiller- Any Problem- Any Part- Any Refrigerant- Anywhere.

The seal was replaced from our range of seal sizes, on the shelf in our stores. The reassembly being the reverse of the strip down, the lift and shift team aligning the end plate for refitting on guide runners. It was then tightened to the correct torque setting. A little at a time, the water system valves were opened until full flow and water system pressure was achieved. No leaks occurred, so it was time to go on to the next phase of the job…

After bringing this chiller back online, it went through a timer, then loaded up steadily to 68%. The refrigerant system readings had been taken previously, so they were compared to the readings taken after the job. A lot more heat transfer being achieved with more latent heat being absorbed from the process.

The above mentioned process was repeated to the remaining chillers one at a time. No issues were encountered and the whole job proceeded steadily to completion.

The load from the factory is very steady, so each time another chiller evaporator was cleaned, the row of chillers would unload slightly. They were running at 72% on arrival, then 68%, then 63% then 59%. This was demonstrated to the customer as a visual way of proving how we had improved the efficiency of his plant. Compressor unloading uses less electricity, so lower carbon emissions and a lower electricity bill are the direct result of our maintenance. Also, kilowatt hour meters are linked to the maintenance manager's computer for monitoring.

As with all of our jobs, the work location of the chillers was left in a better condition than when we arrived. Any waste and unused items being recycled or returned to the stores on site or the stores at our Head Office. The chillers being wiped down and the end plates re painted. With regular maintenance, we at Maximus Chillers will take years off the life of your plant. It is not unusual for us to keep this kind of plant running for more than 50 years.

To read more about shell & tube chiller evaporators hit the Tag at the top of the page.

Read more about shell and tube heat exchangers on Wikipedia