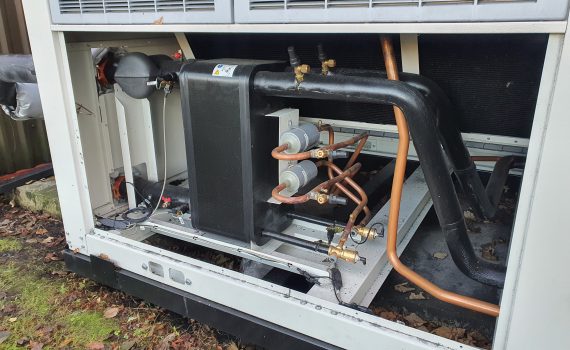 We at Maximus Chillers have just carried out a process chiller repair service for a customer of ours in the North West. The expansion valve on System 1 had been found to have failed and this was the return visit to rectify. There is N+1 redundancy built into the plant, so there was not an immediate hurry to attend site. When our engineer diagnosed the fault, he had a look in our customer’s stores as he knows our customer likes to keep spares. Sure enough- there was a spare expansion valve on the shelf, so he took it and put it in the chiller panel ready for the job.

What had happened to the old expansion valve was that the mechanical part had worn down and jammed part open. This meant that the refrigerant circuit would run for a while with a poor superheat reading, but would trip out on low pressure when more scroll compressors started running.

Our engineer disabled System 1 and removed the fuses. This was to prevent an accidental start up during the repairs. He used his lock off padlock, to which, he was the only engineer with a key.

The full refrigerant charge was recovered into 2 small recovery cylinders which were taken to the refrigerant storage cage. This is a segregated area to reduce the risk of explosion in the event of a fire. It is also shielded from direct sunlight to reduce refrigerant pressure inside the cylinders.

The next stage of the job was to remove the failed expansion valve, so a Hot Works Permit needed to be obtained from the Maintenance Department. It was counter signed by the permit issuer and our engineer with the fire watch time added to the additional information section.

The equipment was taken out of the company vehicle and set up near to the chiller. Care was taken to ensure that the oxy-acetylene was not in the escape route for our engineer in the event of an accident. The condition of the equipment was inspected and a leak test carried out.

The covers were removed from the location of the expansion valve, the lagging stripped back and the electrical connection removed. The old expansion valve was now ready for removal…

Our engineer heated the inlet to the valve until the solder melted and then removed the liquid pipe. He then repeated this on the expansion pipe. Now that the old valve had been removed, he used a specialist tool to clean off the remaining solder and impurities on the refrigerant pipework. Having done this, he fitted the new valve into position. A special heat sink was used to protect the new expansion valve during the brazing operation. Then, the inlet and the outlet pipes were silver soldered into position.

The integrity of the entire system was proven by carrying out a nitrogen pressure test according to standard industry guidelines. The customer witnessed the start and the finish of the test and this was recorded on the Pressure Test Certificate.

Our engineers carry a powerful 10 cfm vacuum pump as part of the equipment in his car. This pump speeds up the removal of moisture and also non condensables from the system such as air and nitrogen. Our engineer left the process running overnight and returned in the morning to find deep vacuum had been achieved.

The correct amount of refrigerant was recharged into the system and the cylinders were returned to the storage area.

The controller of this machine automatically gives you the fridge system readings. However, our engineer wanted to fit his own test equipment to the chiller anyway. This was to test that both readings were the same for calibration purposes. Having done this, he ran the system and waited for it to load up to 100%. Then, he took the superheat and the subcooling readings which were found to be within standard industry guidelines.

All of our engineers leave the work location of the chiller in a better condition than before they attended site. Good house husbandry goes a long way to promote the professionalism of a chiller company. The little things are what you, the customer, often notice first as some of the more technical things are not always so obvious.

The permit to work was signed off having completed a satisfactory fire watch. Our paperwork was then completed and scanned into Head Office. We like to do this on the day of the job, so your accounts department gets the report promptly and can start processing the Invoice.

Our engineer then gave the chiller a mini service for the rest of the day. All readings were taken on both of the refrigerant systems and compared to the Tick Sheet of the previous maintenance visit. This was to see if there was a deterioration of any of the readings over a period of time. Small problems would show up before they turned into big problems. This is just another way of how we at Maximus Chillers saves you money.

Just to make sure that the machine had settled down satisfactorily and that there were no further issues- our office arranged a courtesy visit a few days later. The chiller system was still operating as it should and there were no other faults to report.

Read more about electronic expansion valves on the Carel website.