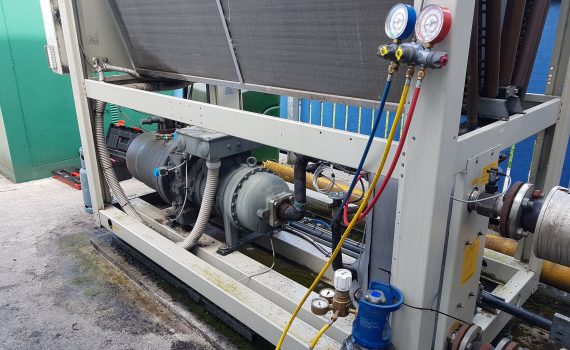 The regulations for F-gas chiller leak testing have been devised to reduce the environmental impact of HFC refrigerants. They are standardised regulations which are implemented across Europe. Now that we have left the EU, we will continue to be aligned with these regulations.

Now we have had a look at some of the regulations, let’s have a look at a day in the life of our engineers here at Maximus Chillers. Read below for three different examples of leak testing carried out in the field…

In the photo a leak has just been brazed on the condenser. It is recommended in the industry to use a steel braided line with a ¼ turn valve. This is so that if a nitrogen regulator malfunctions, it can be valved off, instead of a system being filled with bottle pressure from the cylinder. For a small system, this could cause a catastrophic explosion. We decided, therefore, to use a small cylinder which would expand into the large volume of the chiller. Should this fault occur, the safe working pressure would not be exceeded. This was taken into account when writing our Risk Assessment Method Statement. The pressure was built up in stages until the test pressure was achieved. This was recorded on our Pressure Test Certificate and witnessed by the customer. The result of the pressure test 4 hrs later was satisfactory and also witnessed by the customer.

A return visit was arranged 2 weeks later to leak test the chiller again. Our engineer carried out a visual inspection of all of the parts of the refrigerant pipework. He then used an electronic leak detector to see if it went into alarm. All was okay, so he completed the F-gas Certificate and left it in the customer’s file.

On another site, we look after 6 air cooled MW chillers in a row outside a building at a petrochemical facility. Our engineer ran the systems up, one at a time, to 100% so as to show up any refrigerant shortages. He was looking at the subcooling and superheat values. Two of the systems had poor readings which alerted his attention to a potential leak. On one of the systems, the poor readings were found to be caused by a faulty expansion valve. On the other, he diagnosed that the chiller was running short of refrigerant. He then carried out an inspection and found signs of a leak on a liquid pipe, just after the filter/ drier. The system was locked off with the refrigerant valves closed either side of the leak. This was to prevent the refrigerant from carrying on leaking to atmosphere. Then, he sent a report into Head Office detailing the estimated refrigerant addition needed to replace the refrigerant lost. Refrigerant removal was not needed as the area of the leak had been valved off from the rest of the system. He also detailed the materials required for the job and the necessary labour time that would be needed.

Looking for a Leak

There are a variety of methods that can be used to identify the location of a refrigerant leak. Here are some examples…

An ultrasonic leak detector uses a microphone on the end of a wand. This is connected to a battery and processing pack, which is where headphones are plugged into. The sensitivity can be adjusted on the processing pack until a good working level is found. The various components on the chiller can then be inspected to find an audible sound of a leak.

Otherwise known as a sniff tester, the electronic leak detector is one of the most popular types of leak detectors. The battery can be recharged via the cigar lighter in a car, or can be recharged back at the office with a transformer plugged into the mains. The heated diode sensor and the filter can fail or need to be replaced, so replacement parts are available. The instrument needs to be calibrated to a no refrigerant atmosphere, then it takes samples of the atmosphere being tested. It compares the two atmospheres and looks for a difference. Most electronic leak detectors work with all HFC refrigerants.

There are a variety of bubble up leak detection sprays that are available off the shelf. At Maximus Chillers we make our own leak detection solution in our laboratory at Head Office. We mix two chemicals together in the correct proportions. This solution is carried in sprayer bottles in the boot of each of our company vehicles. When looking for a leak, our engineers use it around the suspected areas of a leak. It is the best form of leak detection that we know, as it can find the smallest of leaks, right up to large leaks which are audible to the ear.

To read more about the f-gas chiller leak testing procedure hit the Tag at the top of the page.