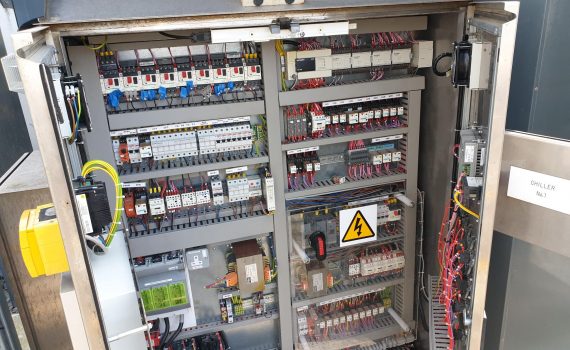 Chiller controls can be remotely operated and monitored, but in this article, we will be looking at chillers operating in local.

Each chiller has a panel where the lead or the lag chiller can be switched from. They have N+1 redundancy built in, so one of two chillers will normally be in standby with the other one running. The chillers in the photo are equipped with kilowatt hour meters because the customer wants to monitor their efficiency. He has targets to meet and wants to gauge the effect that our maintenance has in reducing his energy costs.

The condenser pressure control is external and stand alone from the panel.

A transducer is fitted to the discharge pipe near to the compressor. This gives a 0 to 5vdc control signal to the fan speed controller which is bolted to the frame. There is a minimum and a maximum value on the transducer, so the FSC is programmed to work out the pressure from the voltage.

415v on three phases are the input to the FSC. It uses solid state thyristors to regulate the output to the fans. This is according to the demand received by the transducer. Solid state means that all the parts are electronic with no moving parts. Fan speed controllers are really good at extending the life of the fans. This is because all of the fans operate together- smoothly and reliably.

There are three essential digital inputs to the controls of any chiller. All of them have a volt signal out to them, which returns back to the panel. If there is a fault- the volts drop out.

This protects the chiller from a low pressure condition. Compressor and evaporator failure would result, so this device is set below the running pressure of the system, but high enough to offer protection.

If the head pressure control mentioned above were to fail, this device would save the chiller from damage from excessive pressure in the system. Components or the pressure relief valve can blow causing a catastrophic refrigerant leak.

This device detects a lack of flow in the water system. Serious system failure would result if this part is not maintained properly. It needs to be periodically tested and adjusted at regular intervals.

The essential analogue inputs on a chiller are the Water In and the Water Out sensors. These are usually NTC (negative temperature coefficient) that is to say: if you hold one in between your fingers and warm it up- the resistance will start to drop off. They usually read in kilo ohms which can be read on a standard multi meter. The program looks at these two sensors and using an algorithm, it calculates the loading requirement of the compressor. They can read incorrectly, so a sensor offset function is available in the software for adjustment. This is just one of the many checks and procedures that we carry out during our maintenance visit.

In the photo you can see wires from the various devices around the chiller, wired into a row of relays. These, in turn, are wired into the white relay board at the top. This relay board has several expansion boards linked into it which are held together with an electrical ribbon. Next, the relay board is wired into the PLC...

The reason for these steps in between a device and the PLC is for protection. Sensitive electrical components can be blown due to an earth shortage. At each stage there is a volt drop from 240v to 24v and then to 5vdc.The programmable logic controller is the nerve centre of the chiller. This is where all the inputs go to and where all the digital outputs are sent from. The controller on this chiller is Beijer Electronics- it comes blank from the factory. User keys to operate the chiller are positioned below the display. It can be programmed to run most chillers and indeed it is often seen in factories running anything. A laptop plugs into it and the software for the chiller is uploaded. On one visit, we found a fault with this controller. We bubble wrapped it and took it to our electronics laboratory at Head Office. The issue was easy to resolve- it was just dust tracking across the back of the PCB and so corrupting the program.

The main digital outputs on this chiller are:

This is a camber where the level of refrigerant which is coming in from the condenser is detected. The level is transmitted to the PLC, where the program sends a signal to the expansion valve. It opens to the correct degree according to the load on the chiller.

Whatever the problem with the controls, we can find a solution to resolve it. With years of industry experience and a fast supply chain, we offer a service that is second to none. Being able to retrofit is part of what we call the MAXIMUS ADVANTAGE™ Any Chiller- Any Problem- Any Part- Any Refrigerant- Anywhere.

Read more about Chiller Control Basics on the Engineering Mindset