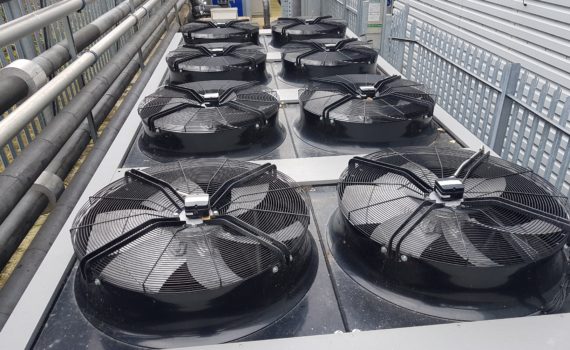 Chiller fan deck service is usually very good, but this is bodger watch! A new customer of ours was telling us about this little guy that used to come. He was reported to have been running around like the apprentice- ringing everybody up! Then when help came, it came in the form of this huge, big man who proceeded to get stuck in the chiller! You couldn't make it up! This is bodger watch! The customer asked for a professional service from Maximus Chillers.

Our engineer found the head pressure control was bringing the fans thumping on and off forwards and backwards. During a visit, the fans were found to be rattling the frame and juddering the chiller into leaks.

Instead of just swapping like for like parts. Our engineers have the capability to think outside the box and make changes to chiller design. All of our engineers attend the Maximus School of Chillers at Head Office in Droylsden, Manchester. Read More on the Chiller Company page.

Now the fan speed controllers are fitted- there are no more leaks. Any chiller can be made to settle down into seamless operation.

Are you a factory manager or facilities manager with recurring leaks on your chillers? Need your fans replacing or the controls adjusting? Look no further than Maximus Chillers.

Visit the Institute of Refrigeration to read industry papers.