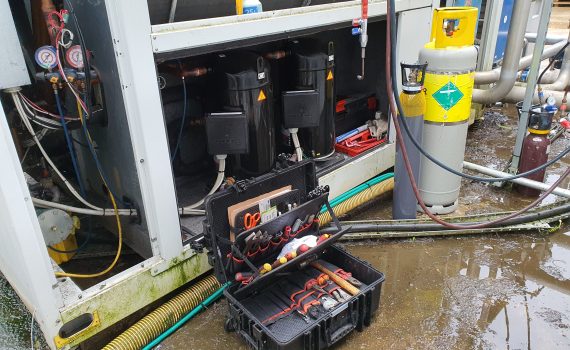 A typical rainy day in the North West, perfect for a chiller service company visit.

This was a return visit to do a refrigerant leak, but the customer alerted our engineer’s attention to an electrical fault. System 2 was found to be locked out in fault on the recent maintenance visit, but now System 1 was being held off too. The fault message on the controller was High Pressure. The controller sends a 240v fault feedback signal, through the high pressure switch which returns to the controller. Our engineer had a look at the wiring diagram to find the number on the terminal strip and checked it out with his multimeter. As he suspected, there were volts going out, but not coming back. He removed the side panel for system 1 and found the switch on the discharge pipe. It was the type that has a red button on the top. When he pressed it, there was a click and volts returned to the controller.

He interrogated the Carel controller and followed the reset procedure. The controls went through a timer and then the start sequence was initiated.

After the first scroll compressor started, the head pressure started to build up, but the condenser fans did not start. The on board high pressure gauge carried on rising until the high pressure switch was tripped again.

A transducer on the discharge is used by the controller to sense the pressure in the condenser. When our engineer looked for this in the controller, it was found to be reading wrong by a considerable amount. There is a facility to enter a password and recalibrate the transducer, but this only allows for a small adjustment.

Our engineers carry various kinds of test instruments which can be used to give a temporary false reading to the controller. This gets the customer up and running and back in production whilst a new transducer is ordered and sent to site.

Now on with the job to resolve the low pressure issue with the chiller.

Our engineer lifted the liquid line solenoid valve and decanted the remaining refrigerant into a vessel using his recovery unit. He only got out 7kg of a charge of 36kg.

We use nitrogen for the leak testing as it is an inert gas that will not cause problems with the refrigerant system. There was a sign of the leak in between the steel frame at the middle of the condenser and the condenser tubes. We always strip the chiller down and leak test the entire system though. This is so that the job does not end up going round in circles. At first the leak could not be found, so the pressure was built up in stages, taking into account industry recommended guidelines for a chiller. Sure enough the leak was where it was suspected to be. The occurrence of this kind of leak can be reduced with the use of vibration eliminators.

The location of the leak was reported to the maintenance engineer onsite and a hot work permit obtained. The equipment we use is tested at regular intervals to be safe and in good working order. A half hour fire watch was stipulated in the permit, along with the removal of combustible materials from the work location. Correct PPE being donned, he brazed the leak to the required industry standards.

A chiller has a different pressure test procedure to other systems, so our engineer built the pressure up according to industry standards, then recorded it on his pressure test certificate. After the required time had elapsed, he rechecked the readings which were found to be satisfactory.

Each of our engineers carries a state of the art 10 cfm vacuum pump to speed up the dehydration process. We use high quality Torr gauges too, so as to get an accurate pressure reading. A good read back was achieved at the end of the process.

After the refrigerant recharge was carried out, a satisfactory run test was achieved.

This particular chiller uses an economizer to further subcool the refrigerant. Chiller designers have worked out that the end user can save a considerable amount of money over 10 years if these components are used. After the subcooled liquid refrigerant leaves the condenser, it goes through a plate heat exchanger. Some of this refrigerant, however, is diverted through a thermostatic expansion valve, to the other side of this plate heat exchanger. Further subcooling occurring through the plates.

The refrigerant drops in pressure as it goes through the expansion valve. A bulb is fitted to the suction pipe on the outlet of the heat exchanger. The bulb has to be at the correct 'o clock position as oil insulation will affect the operation of the valve. A capillary tube connects the bulb to the valve. Inside the bulb, the same kind of refrigerant that is running in the system is present in its liquid state. As the temperature rises in the suction pipe, this refrigerant boils off, adding pressure into the capillary tube. This added pressure forces the power element down on the valve body and a needle forces the valve open.

Imagine if the refrigerant was not subcooled at all. It would be around its saturation point with a lot of it flashing off into its vapour phase. Not good when you have warm water coming back from the process. The refrigerant would not absorb very much latent heat into the refrigerant system.

Imagine, on the other hand, the economizer which is fitted to this chiller. Now we have a good proportion of refrigerant in its liquid phase, on the low side of the system, with a minimum amount of flash gas. The warm process water has more chance to cool and the refrigerant absorbs a lot more latent heat. The chiller achieves set point easier and therefore saves a considerable amount of electricity. With this further subcooling monitored for a while, time for a signature from the customer and another job well done!

To read more about chiller electrical faults hit the Tag at the top of the page.