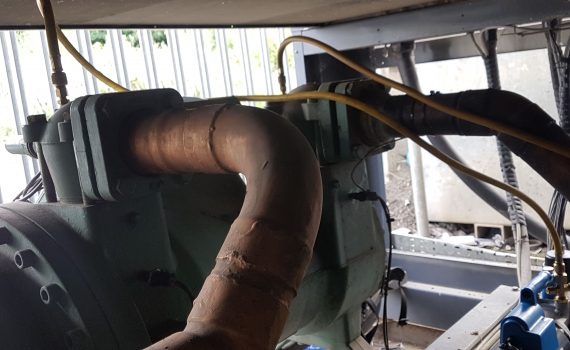 The photo shows HFC chiller service being carried out on a 600kW machine. It consists of two systems with a large Bitzer compressor for each system. It has a bespoke Micro Control System front end to run the machine and stop it should there be a fault condition. The chiller had been reported by the customer to have tripped out on a low pressure fault.

The readings of superheat and subcooling are available in the controller. This removes the need to fit instrumentation carried by our engineers. The process of diagnosis was therefore speeded up. The result being that the chiller was found to be running short of refrigerant.

Return Visit to Decant the Refrigerant

A Quote was submitted to the customer for approval. Once the Order was raised, a convenient time was arranged to return to site and carry out the service visit. The remaining charge of refrigerant was decanted into our recovery vessels with one of our fast pump out units which are carried by each of our engineers.

Looking Around the Pipework for a Leak

Nitrogen, an inert gas, was introduced into the system to assist in the location of the leak. The leak was quickly found on one of the end turns of the condenser.

Our engineer made good the leak using his brazing torch. Then, the integrity of the system was proven to industry standards with a system pressure test.

After the chiller had been recharged with some of the charge of the refrigerant R134a, the remaining refrigerant was charged in its liquid phase, away from the compressor, until the superheat and subcooling values were within industry limits. A large amount of load was available to the chiller as it feeds an air blown film plastic manufacturing facility.

Read more about a film blowing machine on Wikipedia