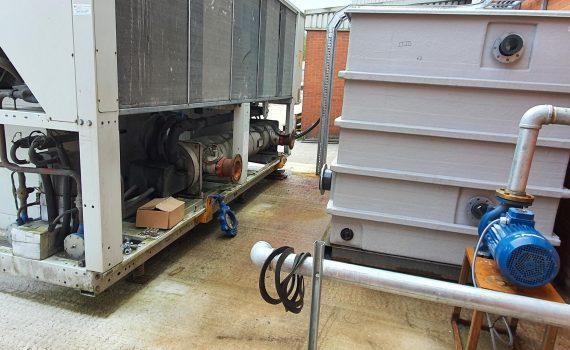 Chiller commissioning is carried out to resolve any issues and get a machine running with optimum efficiency. The first three days are the most important part of a chiller’s life. This is because a chiller will carry along with it any problems that were not resolved at the start.

We at Maximus Chillers are the approved supplier for various manufacturers as their first choice to commission their new chillers. This is because we have earned a reputation within our industry for the capability to do anything- this is just part of what we call the MAXIMUS ADVANTAGE™ Any Chiller- Any Problem- Any Part- Any Refrigerant- Anywhere.

Our customers are concerned with lowering their carbon footprint and reducing the environmental impact made by cooling systems. One of the ways they do this is by purchasing used chillers which still have 10 years of life in them. This means that there is a dramatic saving in the carbon emissions that would have been released during the manufacture of new chillers. Used chillers often come from factories that have been re located. They also come with a full service history.

The chiller in the photo is about to have the commissioning process carried out. All that is left to do is for the onsite engineers to fit the Inlet and Outlet pipes to the evaporator. Then, fit the water system pumps and other water system components.

A cup of coffee and a good look round before staring anything. There were still a few nuts, bolts and washers left lying around by the onsite engineers, so a good opportunity for some house husbandry. This done, our engineer switched the main power supply on to the chiller…

The machine went immediately into the flow fail fault. Then, he powered up the chiller pump set and the process pumps that feed the factory. The flow fail alarm cleared- so that was the flow switch ticked on our detailed Commissioning Sheet.

The buffer tank auto fill sensors had been positioned incorrectly. He adjusted them to the correct level, the mains water auto fill started and the tank filled to its set level.

A small leak was found in between the outlet pipe from the buffer tank and the inlet of the process water pump. Our engineer rang one of the onsite engineers who arrived to tighten the connection.

There hadn’t been an opportunity to tighten the wiring for some time as this chiller had been in continuous production in another part of the factory. Each wire around the chiller was tightened including the panel, the fan decks and the motor terminals on the Bitzer screw compressors.

The application and set point were different for the process at the new location of the chiller. Therefore, the controller was interrogated using a password to access the parameters. The parameters were modified, one at a time, until they came in line with the customer’s requirements.

A fault was showing on the remote controller display that was not showing on the chiller controller. After following the diagnosis and consulting the wiring diagram, the fault was traced to three wires that had been connected in the wrong order- an easy fault to rectify.

Having sorted out the above, it was time to run the chiller up in anger…
A time was selected for start up when maximum load was available from the factory. This was to ensure that the machine could cope and to show up any problems.

This system started at 25% capacity and loaded up through each stage until it reached 100%.

A low oil level was recorded on the oil sight glass. Therefore, our engineer carefully monitored the compressor amps, temperatures and pressures to see if the compressor was starting to leave its nominal operating conditions. Bitzer screws are a high quality and very robust compressor, so the readings stayed good until the oil level returned.

This system then started and loaded steadily to 100%. All of the chiller readings were taken and were found to be within standard industry guidelines.

As the chiller started to near the set point, both compressors started to unload to match the load. The load can vary according to what the process engineers are doing at the time, so proving the compressor loading was critical to the efficient running of the plant.

With the Commissioning Sheet filed in the cabinet, the next scheduled maintenance visit was talked through with the customer. There are 3 minor visits and 1 major visit during the year. The major visit is scheduled to take place during the winter. This is because there is more time available to carry out the periodic oil and filter changes.

To read more about chiller electrical faults hit the Tag at the top of the page.

Read more about chiller commissioning at Safework Method of Statement