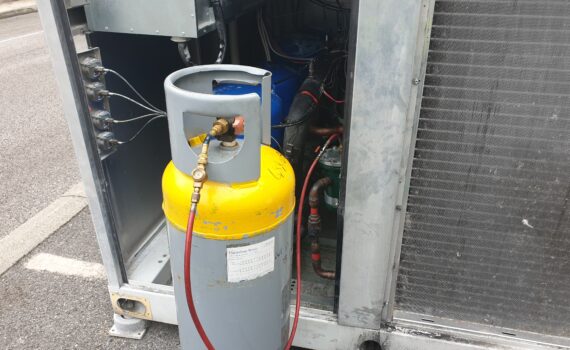 The 4-20mA transducer needed service on the chilling plant. It was reading low by a long shot. Therefore, the PLC was not bringing the fans on as it should. The pressure in the high side of the system was getting up to 40 bar. This is because the refrigerant was R410a- it has a higher head pressure than other commonly used HFC refrigerants, such as, R407c. We ordered the replacement transducer which is fitted with a female fitting

The remaining parts of the system were leak tested then the chilling plant was put on a pressure test to ensure the whole system was leak free. The pressure test was satisfactory and so the evacuation process could be started

Each of our engineers has a powerful vac pump to speed up the dehydration process on the chilling plant being serviced. This means that a deep vacuum can often be pulled on the same day instead of the usual overnight process. The nitrogen and other non condensables were removed quickly and the Torr gauge came down to the pressure where moisture was being removed. At this pressure, any moisture is forced to boil off around the system

Recharging of the Chilling Plant Being Serviced

In the photo, the chilling plant is being recharged at the end of the service work. It is being recharged into the liquid side of the evaporator. All readings were okay when running the system and further leak tests were carried out at normal operating pressures